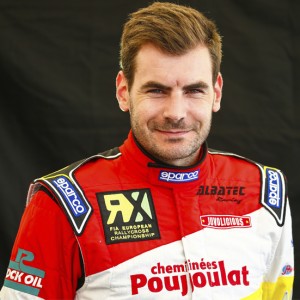 Worst racing moment: They are behind me!

Jérôme began his motorsport career in ice racing in 2003 and contested the 2005 Andros Trophy where he secured 14 podiums from 14 races. The following year, aged 22, he switched to rallying in the French Asphalt Rally Championship, finishing third to become the youngest driver to win a rally and reach the podium.

In 2015 Jérôme led the team’s assault on the FIA European Rallycross Championship aboard a two-litre, 16v 600bhp Peugeot 208 RX Supercar, and appeared alongside four times World Touring Car Champion Yvan Muller in the Lohéac round of the WorldRX.

Starting the season with a win in Belgium put Jérôme immediately on top, securing Albatec’s first outright Euro RX victory. Consistent finishes in the following three rounds ensured the title fight would go to the final round, where he twice suffered a hit which damaged his car and brought his title bid to an end.