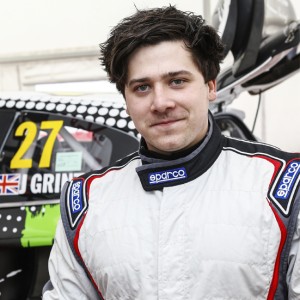 Known as: Grint the destroyer…..just James!

Helmet colours: Many, many colours

James began his career in rallying, netting first overall in the Essex Charity Stages in his debut season. In 2010 he clinched the BTRDA Group A title before moving into the British Rally Championship in 2012 piloting a Citroen DS3 R3.

In 2013, he moved into rallycross with an impressive debut at the end-of-season British Rallycross Grand Prix at Croft, where he powered his RX150 to a maiden outright victory. During 2014, James tested with Albatec in France, where he immediately impressed sparking his ambition to race one of the team’s 600bhp Supercars.

In 2015 James joined Jérôme Grosset-Janin at the wheel of one of the team’s two litre, 16v Peugeot 208RX Supercars in the FIA European Rallycross Championship, after making his British RX debut at Pembrey. Consistently fast throughout the events and knocking on the door of a place in the Final, James secured three semi-final places from the five rounds.

This season James will spearhead Albatec’s assault on the MSA British Rallycross Championship with Odyssey Battery. One of the most exciting drivers to watch, his former rally career coming to the fore, James has targeted race wins in 2016, as he bids for the crown at his first attempt.